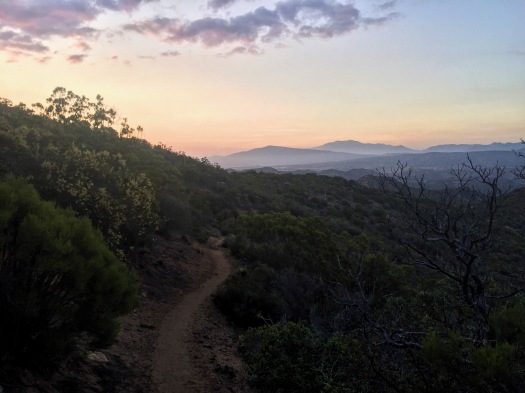 Camp tonight is at a random campsite where there are water caches that some lovely human has left for hikers. There is not a cloud in the sky and the stars are twinkling like embers of a smoldering fire.

I finally figured out how to do this desert thing. You start at 5 am, drink ten liters of water by noon, chill until 5 pm, chute ten more liters of water and things feel pretty good. I left camp this morning around 6 and said bye to Neil Bob without knowing the next time I’d see him and headed out to ascend the 5,000 foot mountain ahead of me. The way the sun rose about the peaks to the east and the shadows receded to speaks under the trees made for a beautiful start. The ascent was smooth sailing and my body felt great. I did the first five miles in a little under an hour and a half and had been chugging water the entire way. When I got to the next water source I filled up and sat for a while listening to the most gorgeous bird I’ve ever heard. The small creek was gurgling and things were perfect. Before I left I walked a resonable distance away and dig my hole to poop and saw that my poop was the most insane green color I’ve ever seen. I guess it’s true what they say about Gatorade. 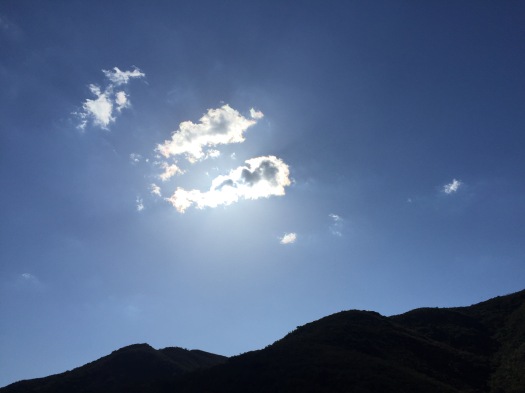 The trail begins the climb by entering another oak forest and curling in and out of hills as it staircases further and further up. There were little pockets of clouds that would cover the sun for a minute or two and every time I would look up and verbally thank them for their support. About 8 miles in I stumbled across a rattle snake and froze to see what it would do. I had my umbrella strapped to me and it hindered my vision so I didn’t see it until I was only five feet away. The dude just sat there and chilled but it was right on the trail do something had to be done. I poked it with my pole and immediately it started rattling and curled up in its terrifying striking pose. I rolled a couple of rocks at it and finally the snake retreated off the side of the trail and I think it fell off a little five foot cliff because there was a loud thud after I watched it leave. I chuckled.

Around ten I walked up on an older man who was resting in the shade and greeted me before I even saw him. He had soft, gentle eyes and a short, scruffy, grey beard accompanied by a subtle southern draw. He told me that he would be getting off the trail today because his body just couldn’t make it any further. I asked him what was going on and he pulled his pant leg up and his left leg looked like it had been mauled by a bear. He didn’t tell me what happened he just showed me his leg as if that were enough of an answer and it definitely was. He asked me my name and I told him it was Harbor and he says, “Oh, like a safe Harbor?” And I responded, “exactly”. He told me his name was freeballer and I laughed and asked him if it was because he doesn’t wear underwear, but he held his head up high and said, “no. It’s because the people at camp in Warner springs found out I haven’t worn a pair of underwear in 30 years and gave me the name”. The man deserves that name.

After a few more miles the trail winds up the mountain and spits you out into a high altitude valley and the most glorious mountain comes into view. It is covered in green and little pockets of pines are placed throughout it’s expanse. The trail goes through a massive rock bed and right when you are about to ascend the highest peak the trail cuts off and turns you onto a road where you can take a break at a man named Mikes house.
I got to Mikes around 12:30 and had done 18 miles so I was in no mood to be social, but there’s were two other hikers who were talking to the caretaker about their alcoholic endeavors and the best “booty” they’ve ever got. I had no problem resting on the front porch and drinking a beer alone for a few minutes. A strange girl came out the front door whose name is Alexandria. Alexandria is a very shy, quiet girl whose voice sounds like it belongs to a three year old princess. She wore a grey stained tank top, puffy pants and cowboy boots. She was walking around with her tiny, scruffy dogs and smoking a spliff. She asked me my name and I hers and told me that she was here to get another horse. We talked about horses for a minute and then she just stared at me for the longest time without saying a word until I got too uncomfortable and asked her the dogs name. She didn’t respond!! I thought she was broken so I just said screw it and sat there in the silence with her. Obviously she was in another planet and not uncomfortable with the quiet space. We sat on the front porch for a minute and then she said, “I think I’m gonna make noodles” and walked away. Alexandria is a sweet girl. Her dog stayed and sat in my lap for a short while then followed her back into the house. 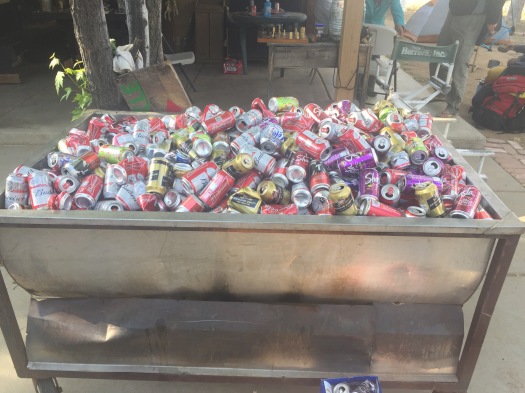 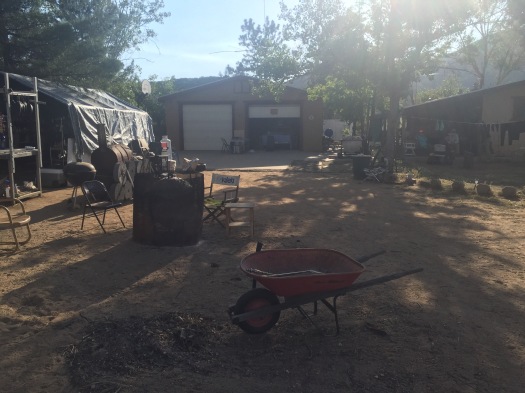 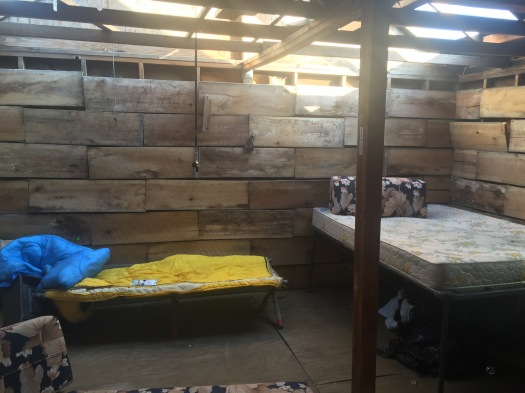 I sat for a while on the front porch enjoying the view and appreciating the different characters that exist in our world. It’s crazy how we get so used to a certain group of people that we live around whether that be in a city or a small community or a work place, but if you decide at some point to open up to others that you wouldn’t usually associate with you can find some real gems out there. Everyone I’ve met so far intrigues me to no end. Alexandria obviously takes the cake, but even the caretaker has a deep personality.

I went to join everyone else and the two hikers were going to head out but first we’re going to try the caretakers very expensive vaporizer. They were very, very excited about this and already been smoking since the second I was there. I just can’t hike 30 miles and do that. Not in this heat. Once the jabronies left the caretaker and I talked about guns and hunting and Texas and beer and football and hoora. It was actually really nice. He’s a sweet man with a scraggly goatee and constantly has a cigarette in his right hand and a beer in the other. There was a tank full of cans in front of us where we sat and we just relaxed for a long time. He taught me about the yucca plant I’ve been seeing everywhere and how if you are in a pinch you can take off all the flowers and squeeze out a cup of water from them. You can also use the dried up ones for perfect kindling and get this!: their roots are like potatoes and whether dead or alive you can eat them!! Their fruit is edible. The flowers are edible. AND…they’re native! And their freaking gorgeous. Other hikers came and eventually roadhouse showed up and the two of us decided to head out to do another ten miles around 5:30. After saying goodbye to everyone, including freeballer who barely showed up at the end of the day, we packed our things and headed out.

The last ten miles of the day were stunning. We had a 2 mile steady climb to get over the ridge that cupped us in the high desert and then once again scaled the east side of the ridge in and out until it poured out into the desert floor. The sun was blocked by our mountain and the ranges to the east were splattered with hughes of pink and purple while the clouds had a faint gold mixed with their pinks as they migrated east. 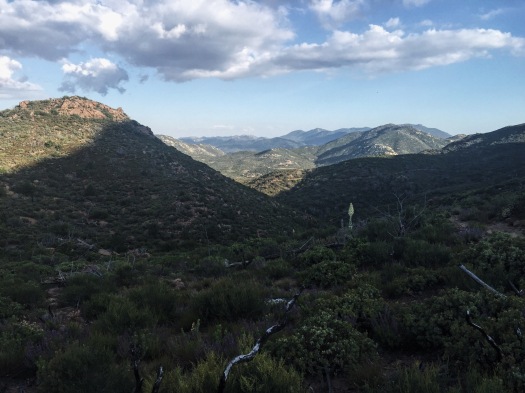 Once on the desert floor the sun began to slip behind a mountain way off in the distance and the color of the bushes were breathtaking. The golden hour had come and was now leaving, but in its final farewell blasted the plants with sparkling rays and the shadows they created contrasted with the shine made for an epic view. 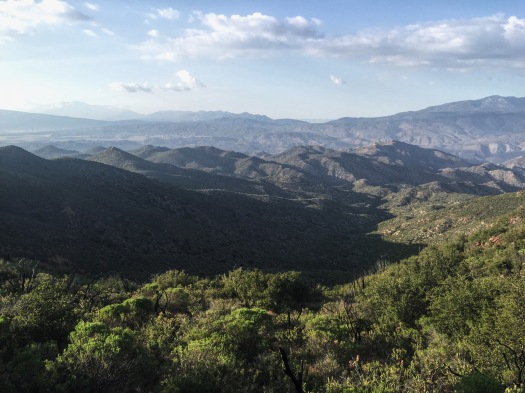 Things got dark quickly so I picked up the pace and did 2.5 miles in a little over thirty minutes to meet roadhouse at our camping spot. Nightly chores were done quickly while coyotes howled in the distance.
Thought of the day:

Why does something new have to start hurting everyday?

One Reply to “A Day Of Gold”