Camp tonight is on a gorgeous love seat under a roof with four walls and a tv displaying America ninja warrior. I’ve enjoyed a couple beers and good company with about 15 other hikers at a Papa Smurf and Mountain Mamas house in big bear. I feel pampered and treated like this is paradise in the midst of chaos.

This morning I woke up because of the heat in the desert around 6:30 and felt like I just hiked a thirty mile day. I felt sick and my legs still had a small burn to them from my allergic reaction and getting myself motivated to move came from a desire to get out of the sun. I finally got things together and began the nine miles to Ziggy and the Bears home right at the end of a brutal desert walk. The sand was deep so that every step seemed to put you further back than where you started and for three straight miles you are just getting dominated by the open sun and the heat was almost unbearable.

The heat from the sun was immediately scorching me from the minute it rose above the peaks. By the time I made it to my first water source I was hiding behind a rock to dry in the shade and get some relief from the heat. The trail took me down a road and dropped me into a sandy path across the desert floor to go under a pass at I-10. I slowly slogged through the sand with hot winds bowing making my umbrella useless and allowing the sun to bake me for three straight miles. Breathing in felt like inhaling air from an oven and my water wasn’t doing anything to allow relief.

After an hour I made it under the overpass and shredded my lack and clothes and collapsed to the floor and starred like a dead man at the concrete structure above me. After some chocolate snacks and a couple liters of water I made my way the final mile and a half to Ziggy and the Bears home.

They were super anal about us washing our hands so I immediately did that and got my picture taken after signing in their 1500+ hiker register for the year. I got to shower and wash my clothes again and spent some time talking to a new hiker friend whose a triple crowner with some helpful insight to hiking and a breath of fresh air in honest conversation and expression. After a while we were told about the fire and the reroute of the trail. Supposedly our only options were to spend four days finding an alternate path trough 110 degree road walks or spend 20 dollars on a shuttle up Big Bear so we opted for the latter. After spending too much time in San Berdino waiting for our bus we got on the road and spent an hour driving through beautiful mountains and arriving in Big Bear at a grocery store to be picked up by the one and only Mountain Momma. Her and her husband, Papa Smurf, have fully opened their homes and allow hikers to shower, watch tv, eat, do laundry, all of the essential things you could want when thru hiking. The joy and rest they give to hikers is a beautiful thing and they are shown and huge amount of appreciation through hikers working on things in their house, helping them clean, run errands or just a couple of dollars. 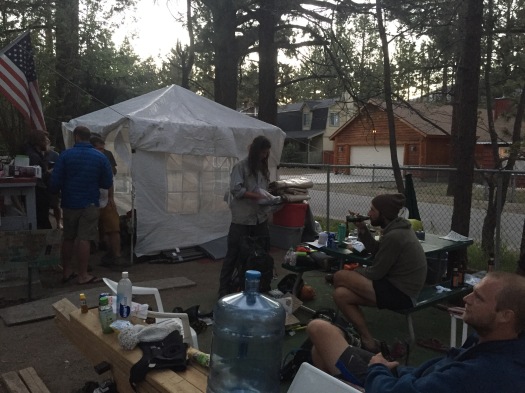 I am now surrounded by other stinky humans who love living outside and pizza has arrived and the laughs are loud from all directions. After a brutal few days in the desert heat it’s nice to get some rest in good company and comfort.
Thought of the day:

I mean I could zero and still be on schedule.