Total distance: 318.6
Camp tonight is right off the trail amongst some aggressive bushes and rocky surfaces. Half a mile back was a campsite, but the bugs were horrible so we opted to keep moving in search of a better spot higher up. I’m with John Z again tonight and as of now there is no sign of Roadhouse, which makes me sad. However, we do have plans to meet for milkshakes tomorrow in the afternoon. I hope to see him there. About three miles ago my legs started giving out after my biggest hiking day yet, and I’m hoping this deep sleep tonight restored them for tomorrow.

When I woke up this morning, I rolled over to check my phone to see that the time was 5:15 am and I was in no way ready to be hiking. I had already planned at starting at six and the stress of the day kept me from drifting back to sleep. The moment I sat up I felt sick. Not nauseous, but a sinus infection kind of sick and blew my nose to see the greens have arrived. Bummer. On my biggest day. Really? I felt weak and wanted to just sleep the day away, but I also wanted to push myself so I downed a clove of garlic and got on the road. I was using John’s pack today and it took me a minute to get everything together while getting used to a new pack. It’s interesting how my pack contains everything I need and how attached I get to those small features it has that make me love it so deeply. John’s pack was sweet though and I was excited to be the first person to I’ve it a test run.

The trail today was spectacular with incredible views that were nonstop. We followed a path throughout the canyon and would scale the ridges throughout the day. At one point I heard a loud buzzing from the left and knew there was a rattler in the bushes and it made John jump off the trail in a split second. Not even an hour after this another rattler slithered under a bush right next to his foot and once again made him leap into the air. Poor guy.

There were tons of hawks and the views of the creek were glorious with the mountains as backdrops. My body felt great coming off a 30+ day and I wanted to do another one today. We stopped for a while at a hot springs where clothing was optional and of course only dudes were naked. Why is it always the men who get naked and whip their jimmys around in everyone’s face? It’s always older men too. Freakin pervs. I was secretly jealous. I’ll probably be a naked old man one day that makes everyone uncomfortable. 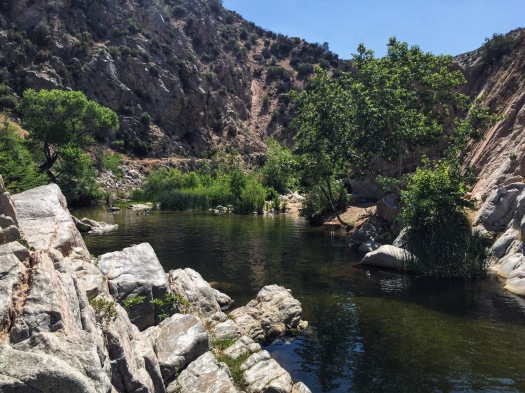 Around 3 the sun really began to heat up the ground and my feet where on fire and my head started to pound. I was so tired and my sickness wasn’t letting up. Inwas told that a hiker had been rescued today by helicopter because of dehydration. He had a history of heart attacks and cancer and felt achy with a head ache and had a mass on his liver. This made me insanely nervous because I’ve been falling asleep half the nights feeling this way. And I’ve had this lump on my back that I keep forgetting to get checked out and I always start to panic when people talk of masses and cancer. I’m sure I’m fine. That is the third I’ve heard of in the past week, however, who had to be air evacuated. There was a heat advisory and I wasn’t surprised to find that out.

Around 3:30 we came to a stream and took a nap for about an hour before finishing our 35 mile day. With nine miles to go my body felt rested and energized and we crushed the final 3 hours of hiking. Our pace today was a solid 3 mph walk and even with the breaks were able to finish 35 miles before the sun set.

Once we found our spot I got the things out of Johns bag that he let me use for the day and once I reached my food at the bottom I came to find that my Hershey bar had exploded all over the inside of his pack. I felt like shit and was so exhausted and having to deal with cleaning out a pack with chocolate caked all in it was not at all what I hoped to be doing. Luckily enough it came off rather quickly and I gave him my pack liner for tomorrow until I could wash it in the lake we will be coming up on.

Now I am sitting on my pad and enjoying the sounds of crickets surrounding me and not allowing my mind to play tricks that they are actually rattlers. My biggest fear is sharing my bag with one for the night. The stars are bright and there isn’t a cloud in the sky and it is finally time for me to get that sweet, sweet sleep that I’ve waited for all day.

Thought of the day:

How many cloves of garlic can I eat before I cause a bigger issue?