I had my alarm set this morning for 4:45 so I could get into Muir ranch early to have a day to relax, but I was woken up at 4 instead to the sound of buzzing in my ear and once again I crushed a bug in my ear. This time I used my headphones plug to get the guts out and laid stressed hoping I got it all until my alarm went off.

I was in a bitter mood when I got up and ate ramen for breakfast because of my lack of food. Cold ramen in the morning is disgusting and should never have to be experienced by anyone. I forced it down and made my way up the very snowy Muir Pass.

It took my two hours to work my way up the snow over the four mile pass and when I finally got to the top I saw that the other side was even more snowy and further than I had come. I sat bummed and to make it worse, a woman came out of the little hut and told me that the Muir ranch sucked and the people were assholes. She said the food was all gone and you had to pay to even see the hiker box. I ate a snickers while she walked away with her partner and felt defeated. 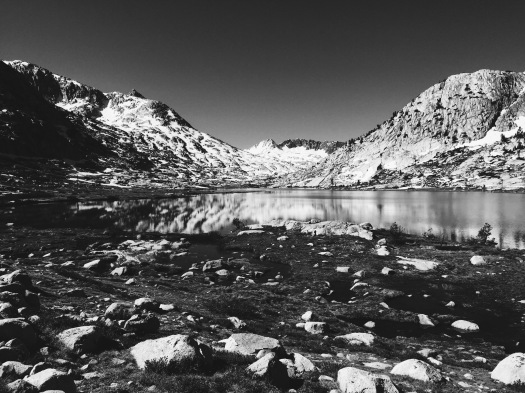 I decided I would go for it anyway and hope I could charge my phone and clean my body so I began a non stop twenty mile ass haul in hike to the ranch. My body was exhausted and the snowy downhill wasn’t helping. I couldn’t get a pace going and was sliding every direction on the trail. I was getting lost, stuck in snow, slipping and on top of that had little sleep from the night before.

Finally I could see the trail again as I wound around a lake and began dropping down into another gorgeous valley filled with pines. The incline was subtle and I was pushing myself so hard to move quickly down the trail. I passed a few people and was told all sorts of things about Muir ranch and kept on soccer mom walking as fast as I could. I forded five creeks and one deep river called Elevation River and never stopped. My stomach began to feel upset at one point and I realized I hadn’t drank any water or pooped today so simultaneously I filtered water as I pooped and immediately got back on trail. It was so ridiculous. At one point I past a girl with a cliff bar and a jar of Nutella in one hand and a spoon with the wrapper in the other and chocolate smeared all over my lips to my nose. She hesitated making eye contact with me as I asked about the ranch and figured out why when I looked at myself on my phone after she left. I was a disgrace, but I wanted to get there early and rest!

And I did. I pulled in around 2 pm and found tons of food in the hiker box and met incredibly sweet people running the ranch. I got a full three days worth of food and plugged my phone in while I went to a river nearby and cleaned my clothes with Dr. Bronners. I got naked and cleaned my body in the icy blue water and laid on a warm rock for an hour before returning to the ranch. I got my stuff together and began a slow hike to my campsite tonight five miles up Seldon Pass by a lake with five other hikers. I feel so incredibly refreshed and energized and ready for three more days before a big rest in Tuolumne meadows. I’m excited to sleep deeply on a semi warm night with my bug net up. I can’t see mosquitos trying to get in and I’m smiling at their failure. The couple in the tent next to me are having an epic fight and an occasional blurt of anger comes from the tent as I try and mind my own business. I will just look at the stars and sing CC Rider in my head as I drift off to sleep within seconds. “Well, hey, hey, hey hey…..” 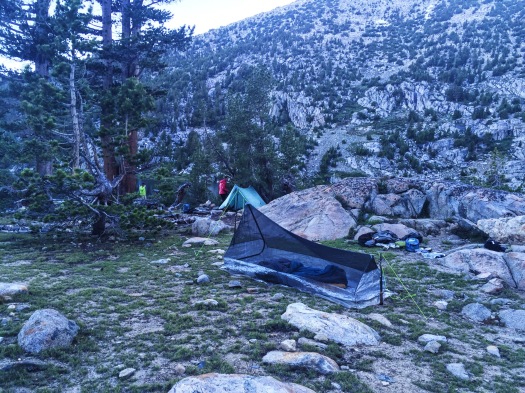