I rolled over at 4:59 to turn my phone off before the alarmed blared through the campground and I startled a deer five feet from my tent in the process. I was still so sleepy and could have laid there for another two hours, but I’m trying to get started early these days to relax during the day and it has been paying off big time.

Yesterday I noticed a lump in the pit of my knee and dismissed it as a knot from hiking fast and told myself that it would go away. Today it was still there and I couldn’t get it off my mind. I immediately had a steep climb out of the river this morning and was dominated by worry and stress about my knee thinking about cancer and amputation and all sorts of scary thoughts. I would convince myself it was fine and then five minutes later find myself in a cloud of worry and fear.

The trail took me slowly up Dorothy Lake pass and a beautiful view surrounded me, but I could only enjoy the shadow of it in the haze of my stress. I felt strong and hiked well, but my mind was utterly dominated by the lump.

I walked through millions of streams and fords today with my freshly new sewed shoes and by the end of the day both had torn and come undone. My feet stayed wet and my mind stayed focused on tumors. 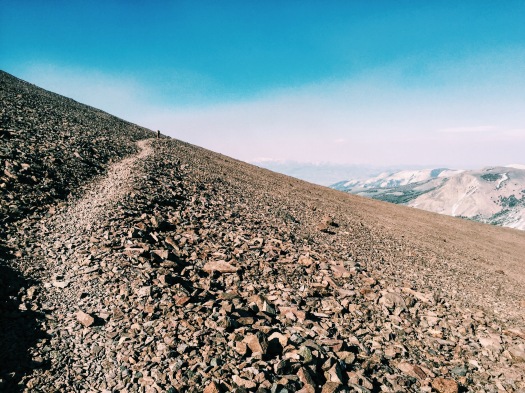 I had one last huge climb out of the pine forest up to 11,000 feet and with about two miles left I stood above the trees and jagged, knifed ridges erupted before me. My mind sort of got away from worry and I walked through snow and loose slated rock to summit the lass mountain of the day. Luckily I turned on my phone and had enough service to call Molly and vent about my worries. She almost laughed at my hypochondria and explained the millions of possibilities of what it could be and how cancer looks and feels and that my symptoms showed nothing of the sort. I could be a cyst or a fluid sac that built up from over working my leg, which I definitely did the day before I found the lump. We got off the phone and I howled over the range below me and lifted my arms as if I just won an epic race when really I just was told to chill the hell out and stop worrying so much.

The last 7 miles were gold to say the least. I met a guy named Moose and we glacaded down a ton of switchbacks and I sliced my hand on ice during one of the descents, but my spirit was so high I didn’t even care. We were told there was trail magic at Sonora pass and our speed increased even more. We were skating down the trails of snow and sliding down pockets with snow flying all around our feet. He had no idea how much stress was just lifted off my shoulders or the heaviness of the day I’ve had.

We got to the road and met a man named iPod who gave us tortilla wraps and beer and chips and sodas and candy and nuts and coke and cookies and phone outlets and jokes and water… The best was to end a horribly heady day. Another girl came over from her van named Ninja who hiked the pct last year and talked with us and her boyfriend appeared out of the woods from a day hike and sat with us as well. The five of us sat and ate and drank and told jokes for a few hours before getting to bed and the nice couple took my bear box to mail it for me so now my weight is lowered as well! I could not have expected an evening like this with a day like I had, but it is such a wonderful thing to go from fear to laughter in the matter of a few hours and be in the company of good people who share a similar heart.