It’s amazing to me how powerful memory is and how different senses can pull you back into that space of what you were feeling at the time. Today I spent all day under a canopy of clouds walking through a lush green forest with ferns and mosses growing everywhere. The air was dry and had a chill when the wind softly blew through the trees and lifted the piney smell to my nose. I couldn’t stop thinking about the AT and the friends I made out there and the changes my life began to make in the world of hiking. 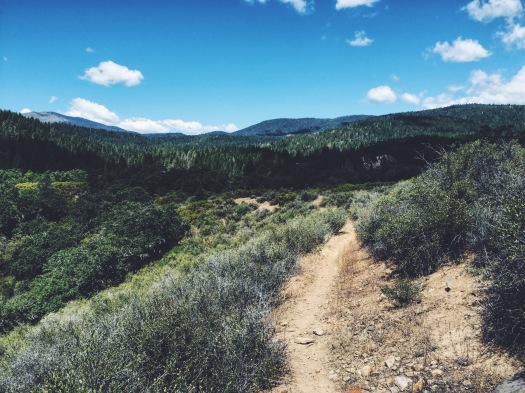 I woke up late this morning and got started around ten knowing that I’d only be doing 30 miles today. I said bye to Roni knowing there was a possibility she would be meeting me further down the trail if there were a road that connected. We both figured it to be impossible so we said bye and I started down the trail.

Most of the day I was under the shade of trees and the clouds kept the temperature cool as my body surprisingly flew down the trail. I love hiking in weather that is just cold enough to make you want to put another layer on if you are at a stand still. It makes it so when you do move you don’t even break a sweat, but stay at a nice warm temperature in the fall feeling air.

The trail zig sighed through the state park and eventually put me over a bridge where I began a 6 mile climb with 1500 feet of elevation. Piece of cake. The trail was cleared of trees or rocks or roots and had a nice duff padding going on that made hiking incredibly enjoyable. Eventually the trail led to a ridge line at the top that I rode for a few miles with the clouds still keeping my body cool. 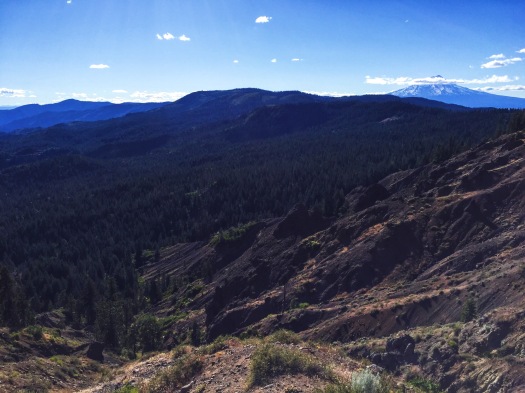 I started to descend off the bluff and was met with views on either side. Mount Shasta to my left and a beautiful range off in the distance to my right. I would see Shasta off and on for the next few hours and slowly dropped in elevation with the final few miles of the day.

Around mile 25 I looked at the time and how far id come and it truly felt like a few hours and not a days work of hiking, but it had been and as I walked up to a dirt road I found Roni’s car and her hammock between two trees and knew I was done for the day. Somehow she had found the trail on some sketchy back roads and set up camp for herself with fruits and water at her side.

I laid my pack down and ate dinner as she told me about the roads and her journey finding the trail. We ended up getting in her car and driving a while down some roads to catch the sun before we found a spot to pull over and make a fire.

I sat down to stretch as the sun began to set and we both stayed out by the fire for about an hour with an occasional song on the guitar. I started to feel the call of sleep and knew I had a big day tomorrow so I called it a night and crawled into my bag that is seriously disgusting at this point. It’s starting to feel crusty at my feet.

As much as I have loved this trail so far I have really missed those dreary cloudy days that the AT provided. I always feel really calm and collective when the weather is that way and it makes my day fly by with thoughts and memories keeping me preoccupied to think about the heat or the miles I still have to do. I’m thankful for the trees keeping the shade on me and the canopy of the clouds for giving me a taste of the sweet times in the Appalachians.