I am staying with a few other hikers at a house owned by three women who have been drinking since we met them. They offered us a place to stay and showers and laundry and without paying much attention to what was going on I said yes and then prayed the other hikers didn’t back out when we all got in the car. It would end up being the strangest night I’ve ever had on trail.

I woke up at 5 am and got moving quickly after that to get into town before the store closed. The trail was steep, but short lived early on and then became rolling as it rides the ridge before dropping into the valley. I hiked alone most of the day, but during my first break I met a man named Pat who chased me for a few miles after he turned around in the middle of his day hike. He was a built middle aged man who never went to college, but spoke as if he had gone to grad school while we discussed sociology and history for our hour together. He quickly began to tell me about his life and how he left his family and friends in Kansas City to recreate himself in Washington and choose who he wanted to be, without the ties of people who have known him his whole life holding him down. I was blown away with his openness and his desire to connect. It worked for me as well in that I’ve been needing some good discussions and connection.

I left pat to finish the small hills before the descent when my shins began to flare up and caused me a ridiculous amount of pain and stress on the way down. I walked slowly through an overgrown, poison oak infested forest, but still faced horrible pain every other step until finally I made my way to the road and hobbled into town. If my shin isn’t better in the morning I’ll have to take a zero so I’m currently propping it up on a couch with ice and hoping a night of rest does the trick.

Once I was in town I bought a huge tub of ice cream and sat out by a table with a few other hikers when the women appeared in their orange jeep and invited us all to their home and then things got crazy.

There were five of us hikers and four of them trying to fit in a five person jeep along with three dogs and our packs. Somehow we squeezed in and proceeded down a dirt road for 45 minutes with a ten minute leg stretch halfway. The woman driving swerved all over the road and a couple of times went into the ditch and whipped it back out. It was funny at first and then we realized how drunk they were. The laughter ended quickly and we all made eye contact and gave each other a look saying, “what the hell have we done?”.

Finally we got to the house and went into to drop out packs and shower while two women started cooking and the others began drinking and smoking more with a few hikers. I was told to put my pack upstairs in one woman’s room because that would be “my room tonight”.  I said no thank you and went to shower while I was followed by her. I had to get myself out of a very forward approach while I stood in the bathroom trying to get into the shower. She stumbled around and would lean in closer to me when she talked and I had to put a hand on her shoulder and push her away gently declining her invitation. She got the idea through her drunken haze and went back downstairs to cook more. I stood in the shower with my shin throbbing and chuckling at the ridiculous setting I have found myself in. I knew it would be a rough night. 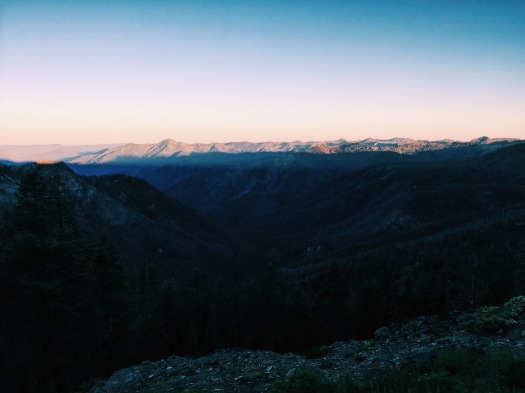 I got out and went down stairs to do laundry and sat by the table playing cards against humanity while the women sang Stevie nicks as loud as they could with the speakers and made inside jokes that made zero sense to any of the hikers.

Slowly the two women cooking brought in food and we ate and sat around for the next few hours just relaxing. The woman who made the pass at me keeps giving me this smile and lingering look and I just ignore it the best I can while talking to anyone else around. Other hikers have picked up on it. It’s seriously uncomfortable, but I’m thankful for food.

Other hikers started picking up on this woman’s forward approach and began joking with me about surviving the night. They started offering game plans to protect me when she came into the room and told me my bed was upstairs and no matter what happened tonight to find my way there. Super. Awkward. One of the women was sober enough to be on our level and told her to chill out and we sat there in silence for a few minutes before turning on Bonnie Tyler’s “Total Eclipse of the Heart” and moving past the tension with loud singing and yelling. The cougar woman proceeded to get more drunk and spilt wine all over the floor and then fell over out of her chair. The sober girl told her to go to sleep and she started crying and  telling us about her ex husband and how he left her for another woman. I had enough so me and a few hikers went to the cabin to hang out while things calmed down inside. The sober girl came to join us with another woman who had been cooking most of the night and the seven of us sat around for an hour or so until I laid down to sleep off the ridiculous night I’ve had.

I had no idea how this day would end up going, but it makes for a good memory in the least. Laying on a bed is a rare treat and I’m glad I’m with two other hiker dudes to talk off the night. The door is LOCKED to our cabin and random jokes about the cougar woman are being tossed around as the three of us slowly drift away on a king size bed in the middle of nowhere California.