From the moment I left the resort this morning I began a slow climb around a few lakes until eventually I summited and was able to look back from where I came. On the way I passed two little baby red foxes and sat for a while and watched them bounce around on the forest floor weaving in and out of fallen trees. At least five lakes sat in the valleys and sparkled like a sea of diamonds. I never once drank from a stream today as every water source was either a lake or a pond. I had to have crossed 20 throughout the entire day. Some blue, some brown, some placid and some that looked like the inside of a sewage tank. I wish I would have made the challenge sooner, but I now am going to try and sleep by a lake every night that I’m in Oregon. So far I’m 5/7. Not too shabby.

I rolled over this morning to see the grey sky beginning to brighten as I laid on my stealthy picnic table. The man on the other want humphed as the two of us quickly got up to avoid being caught. The store opened around 7 and after eating a small breakfast of nuts a banana and coffee I placed my things and started down the side trail leading back to the PCT. This side trail was 2 miles and I didn’t get started until ten, which was not ideal, but still manageable for a big day. So I thought. 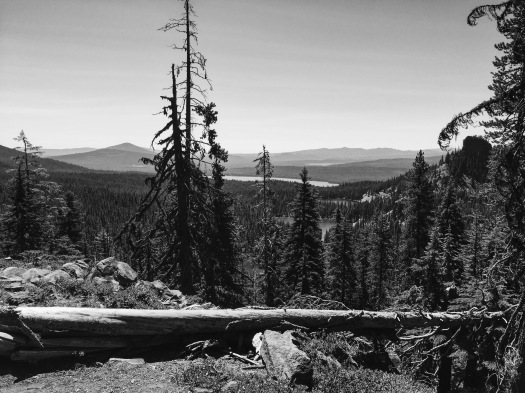 My legs were sore basically all day and I couldn’t figure out why. Not enough water? Shin splints coming back? Getting used to hiking again? I’m a weiner? Not sure, but after stretching every break and chugging water all day they began to relax. I was moving at a solid pace and finding the trail to be extremely smooth until I reached a road and pulled my phone out to see where I was and realized I was 1.5 miles off trail. Shit. I cussed louder than I ever have before and almost sprinted back to the trail. It’s demoralizing hiking off trail. Wasted time and energy. Such a bummer.

I finally got back on trail and my pace stayed high until I reached the top of my final big climb of the day. On the downside of the mountain I came around a bend and stumbled across a man with his penis out facing me while he urinated on the trail. He quickly tucked it away and apologized. I brushed it off and rolled my eyes as I passed the guy. Can’t even go off like two feet dude? There are definitely other people hiking this trail too. I walked a few more miles before my next break and when I resumed I entered an open ridge with burned trees and little firs scattered all around. Once again I rounded a bend to find penis man pissing all over the place. He did the classic tuck and apologized, but this time I said, “common man” almost instantly and walked passed him obviously frustrated. I didn’t want to be a dick, but I saw two many today to be chill the second time. I feel it to be just curtesy to step a few feet off trail to piss, but whatever. Hopefully I’m far enough ahead now to not see that again.

I got really tired around 7 and stumbled to a lake to make dinner and the second I sat down I was swarmed with mosquitos. Hundreds. Clouds and clouds of them. Everywhere. Insanity. I immediately stood up and left my spot and decided to push on to camp until I ate. And I did.

When I got to camp the same mosquito fiasco occurred and I threw my tent up to eat dinner, but when I entered so did 50 mosquitos. I killed so many that I made a small ball of their carcasses on the floor of my tent to throw them back outside. It’s almost hilarious how many there are, but mostly annoying as hell.

It’s cold tonight and the stars are hidden by firs for the most part. There is a soft wind and a consistent mosquito hum outside my tent. I am happy to be horizontal and warm and hoping to sleep deeply for a huge day tomorrow in the land of lakes.