10.1 miles
I understand now why people choose to spend an extra few hundred dollars for a non stop flight rather than finding the cheapest ways to get somewhere. The last fifty hours have been draining, but after the long flights and debilitating layovers I am finally on the Camino and I have to say the first day falls straight in line with the pattern of the trip so far. 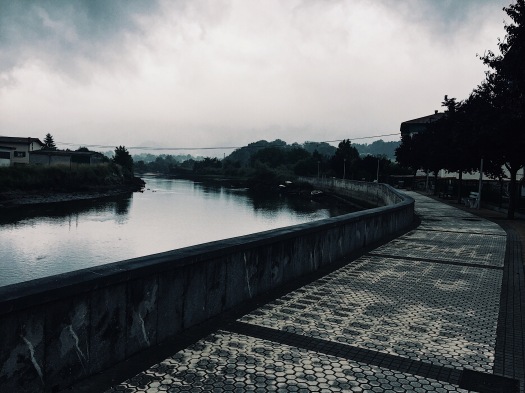 Once I got off the bus in Irún, I grabbed a coffee and a small sandwich before heading out to find the start of the trail. I walked all over the city relying on my gps; crossing railroads, busy streets and active highways. I eventually got to the bridge splitting Spain from France, did some stretching, took a few pictures and began the Camino. The rain came on slowly while my foot began to really cause some anxiety with the fasciae tingling and starting to hurt. I decided to find a shoe store and either replace my shoes or buy arch support, but was nervous I wouldn’t be able to communicate with anyone in a store so I downloaded google translate and found a small outdoor store and had a very awkward and slow conversation with the man running the store. He was very gracious and allowed me the time to look up sentences and garble them out the best I could and I ended up buying a new pair of shoes and hoped for the best. 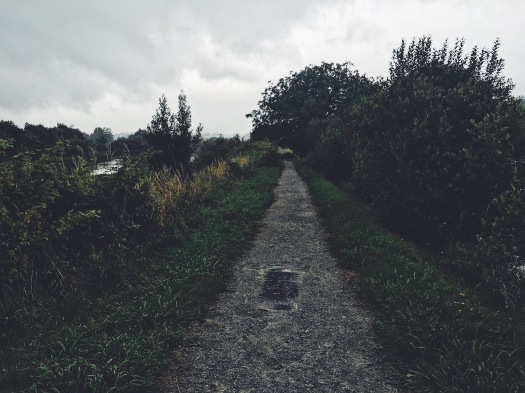 As soon as I left the city the trail entered a beautiful single track path leading into the hills blinding the city from the bay. The grade began to increase with the rain and the concrete turned into a muddied, rocky path that brought my foot pain higher and caused my mind to focus only on the worst possible things that could happen if my foot didn’t get better. I would have no problem biking the rest of the Camino if it came to that, but what about the gr20 and the Pyrenees? 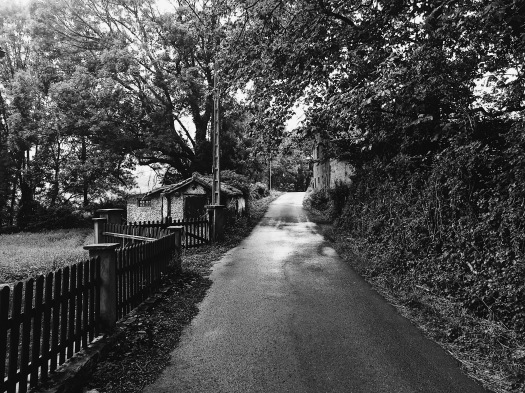 I didn’t hike too long today, but was excited to be hiking along the HPR for a while. After a few miles of a closed canopy and drizzling rain along the muddy trail, I began to go downhill along cobblestone paths that led me to my first Albergue de Peregrino. I waited for an hour in the misty haze with ten other pilgrims, while stretching and admiring the beauty of Pasajes de San Juan. This town was founded in the late 12th century and became a huge trading port. The buildings run along the bank of the bay that stretches further than I can see and a bell rings to alert everyone of a new hour.

Around 1600 a bald man in his fifties with a white goatee came outside and brought myself and thirteen other hikers into the hostel. He was a plump, jolly, direct and welcoming man and was very kind to me in spite of my feeble attempt to communicate. He stamped my passport, lent me a towel, after spending two minutes teaching me how to properly pronounce toalla, and provided everyone with sheets and pillow cases.

After my shower I found myself a bunk and stretched for twenty seconds before my body realized it hadn’t slept in forty hours and sleep began dragging me away. I’ve been having small talk with an older English couple below my bunk who have hiked the Camino de Frances and I’m realizing from our conversations that this hostel situation will be more of the norm than camping and I must admit I am very glad to hear this.