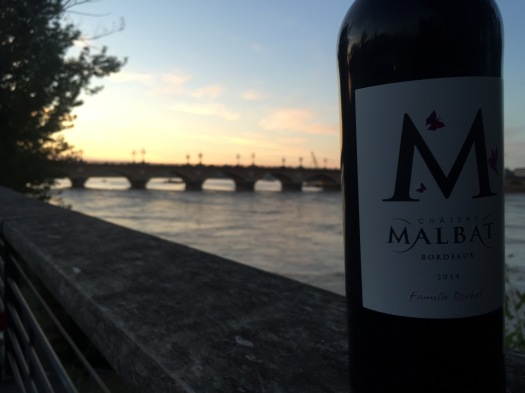 I woke up around 6 this morning feeling incredibly thankful to have slept most of the night through and hadn't been messed with by anyone in our sketchy location. I wanted to go for my morning hike, but there was nothing around that looked appealing and I didn't want to leave ryan alone and vulnerable to whatever lurked in the abandoned warehouses around us. We stayed for a while at our camp spot eating breakfast and gathering our things before finding a way out of Pau and further into our journey. We had no idea how easy it would be to travel across France.

Ryan and I went to a supermarket to get a few supplies before leaving the city and sat on the sidewalk outside the shop eating some lunch while locals walked by and kindly smiled and wished us a good meal. One older woman even ate her snack with us while we sat. We began feeling antsy to leave the city so we threw a thumb up and within five minutes an incredibly sweet woman picked us up and took us to the interstate where the toll booth was in order to catch a ride with people hopefully going far into the country. 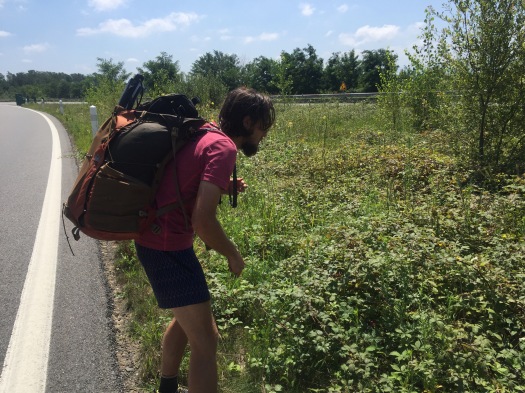 After ten minutes we had another ride with a couple from Argentina and Columbia. They dropped us off on the corner of the highway where after only ten minutes another couple stopped and picked us up. They were on their way to a wedding and dropped us off at a gas station before they left the interstate to head a direction we didn't want to go.

This hitch took a bit longer but we were happy that things seemed to be working and even in the heat of the summer sun we had high energy dancing while we waited to be picked up. About an hour after waiting a man pulled over and blocked traffic behind him while ryan and I tried to get in the car, but the door seemed jammed or something so we took forever to get in while cars backed up and began honking at us. Humiliated,
We finally got in the car and were off.

On this car ride we met a family; a man with his wife and their little kid who loved ryan and wouldn't stop talking to him and touching his beard. I sat in the window seat getting backed by the sun, but loved watching the family talk with Ryan and offer us juices. They were on their way north of Bordeaux so we decided that Bordeaux would be our destination for the night. 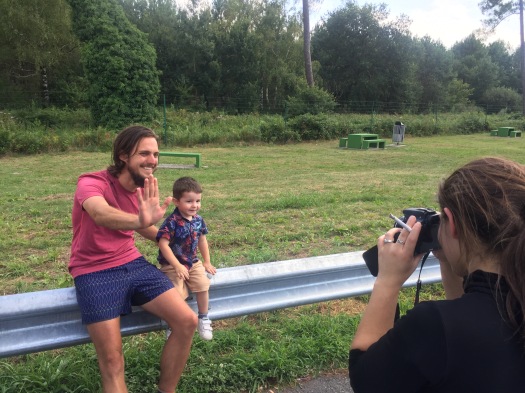 After an hour and a half we found ourselves in Bordeaux. It was around 6 pm and we had no idea what we were going to do. We decided to get a beer and some food and went to lay down in the grass by the huge, chocolate colored river. This was my favorite moment of the day. I felt so much peace laying next to beautiful plants swaying in the cooling air next to a huge river with a cold beer and not a worry in the world. We had travelled almost 300 kilometers in just a few hours and the reality of a wild journey seemed to be coming true. Life is good.

We eventually heard of a meet up of travelers happening a bit down the river so we went to buy some Bordeaux wine and join the group. It took us a while to find them but eventually we did and we met people from all over the world; a German guy on his way to hike the Camino, an Irish guy, two Dutch girls and a Dutch guy, a Korean living in Illinois, a German guy and others I can't even remember.

We sat for a few hours talking with all these people. At one point I got up to go use the bathroom and met a few locals who worked in film and sat with them for a while communicating the best we could. I had a few moments of realizing how crazy it was to be doing all that we were doing. Life is insane right now and I feel like I am truly blowing in the wind and trusting whatever comes my way.

After a few hours some people wanted to go dancing so ryan and I followed along and made our way to a club. When we got there ryan and I were told we couldn't go in because we had bags and the wrong clothes, obviously, so our Korean friend got us an Uber back to his home and gave us some clothes to wear. When we got back we were let in and began to dance.

I didn't feel super social but definitely wanted to dance. I've never been much for raves or huge bar kind of dance atmospheres so I found my own little nook and let loose on my own. I went to a few different parts of the warehouse where different music was going on and was overwhelmed at the wildness of our night.

We stayed for a while dancing until we were told our Korean friend had lost his keys to the apartment and we needed to go with him to figure out what we were going to do. It was 6 in the morning and we were starting to feel exhausted. We said bye to our new friends, exchanged some numbers in hopes to meet up if ryan and I make it to Germany and headed back to the apartment.

Ryan and I couldn't help much so we laid down on the street outside while our host called some locksmiths to figure out his options. Around 8 a guy showed up and popped the bolt off the door and let us in. Ryan and I got our things together and tried to encourage or bummed out friend before we left. He was leaving for Denmark so he was in a rush to leave. Poor guy wasn't going to sleep at all.

Ryan and I left his apartment exhausted and desperate for a place to sleep. We found a small bakery and I bought a baguette while we searched for an idea. Ryan found us a park and we headed there immediately to find a little crater hidden behind some trees to set our tarp out and pass out. 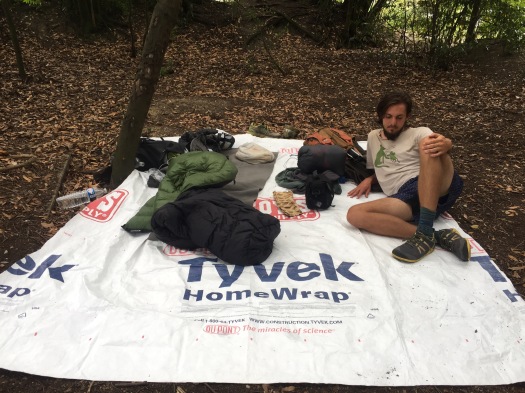 So much has happened in the last 24 hours and all I can look back on and say is wow. We did Bordeaux well and will leave today at some point without regret or low on money. We both feel like we have handled the craziness of going with the flow today super well and hope it continues. This journey east has just begun and already we have found ourselves in some wild memories and are excited for more to come. It feels so good leaving a city without regret or feeling bummed by money or a lack of adventure like I felt in Barcelona. We are on a good track and excited for what's ahead. Thanks for reading!